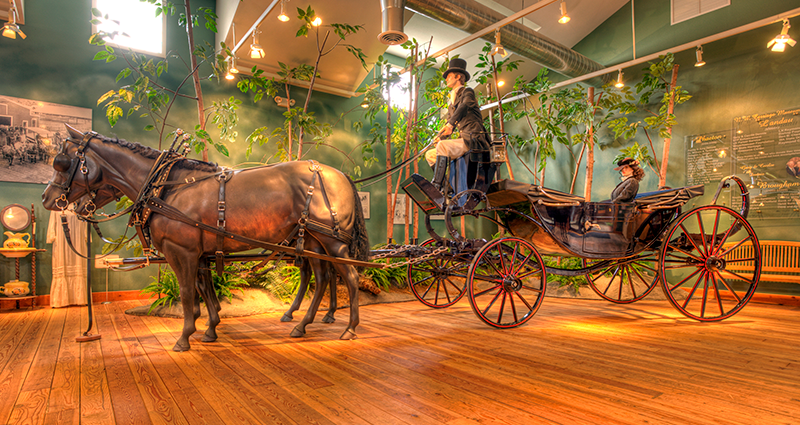 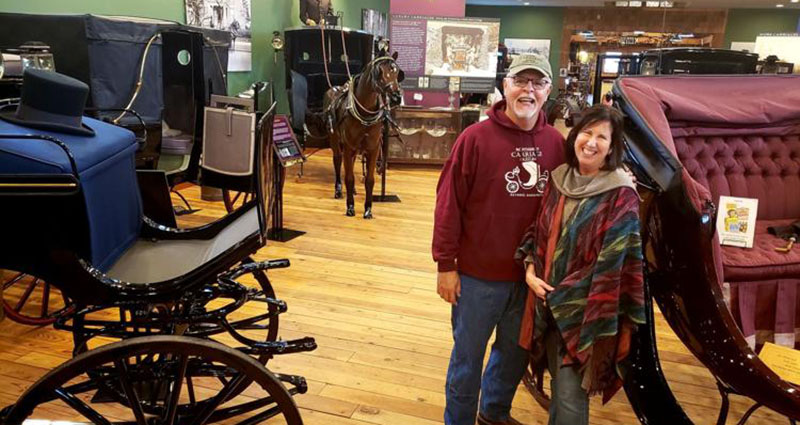 The museum opened in 2002 with 21 horse-drawn vehicles.  Throughout the years, as more vehicles and artifacts were acquired the need to expand our display space was needed.  In 2015, the new “Barn” addition was opened to house our work-related vehicles.  The current collection of 57 vehicles and related artifacts is truly one of the finest in the country. The museum has become Pacific County’s largest year round tourist attraction and is considered a “MUST SEE” for visitors to the Pacific Northwest.

The museum has become a information resource center for horse-drawn related restoration and historical information.
Many vehicles in collection have been fully restored to their original elegant beauty. Other vehicles have gone through a “conservation” process where original paint, pin stripping, trim (upholstery) and lettering are saved and preserved.
Determination as to restoring vs conserving is based on many factors including condition, historical significance, labor and costs.  Since our collection contains both restored and conserved vehicles, visitors get the best of both worlds… Come take a look.

The Northwest Carriage Museum is governed by a Board of Directors and run by an Executive Director:

Daily Astorian — Astoria, OR
“A horse-drawn road grader, a mail cart, a running gear and other working-class vehicles have a new home next door to elegant luxury carriages as the Northwest Carriage Museum’s addition opens to visitors.”

Confetti Travel Cafe — Travel Blog
“The Northwest Carriage Museum is a trip that should be made by vehicle buffs, history buffs, kids and families, and techie and engineering buffs. It’s also for just about anyone else who can appreciate a good story — because there are many here.”

Washington Coast Magazine
“Probably the thing we hear the most from visitors is ‘What is a world-class museum like this doing in Raymond?’ ” Bowman said. “Recently, one fellow who was visiting with his Porsche club from Seattle told me, ‘If this were in Seattle you would be drawing about a half million people a year.’
“I told him, ‘I know, but I’m glad we’re in Raymond.’ ”

Gypsy Journal — RV Traveler’s Paper
“The Carriage Museum has a wonderful collection of antique horse-drawn carriages, including several that were used in movies.”

The Astorian — Astoria, OR
“Jerry Bowman begins each tour by eagerly creating a perspective for what life was like in the late 1800s. He draws visitors into the time period with the infectious manner in which he shares stories and examines the characteristics of each carriage.”

King5 News
“Once dubbed “the gilded palace of excessive extravaganza” by a local newspaper editor back in 1910, the Pacific County Courthouse and its colorful glass dome has long been the pride of Pacific County. Now there’s something else folks around here are getting excited about, The Northwest Carriage Museum in Raymond.”

Seattle Times — Seattle, WA
“In the movie “Gone With the Wind,” Belle Watling, the bawdyhouse madam…asks Scarlett O’Hara’s friend Melanie — who married Ashley Wilkes, remember? — to step into a horse-drawn carriage for a chat…Watling’s fancy Shelburne Landau carriage, with its fully enclosed cab, was perfectly suited to such a tête-à-tête. If you have any doubts, go see it for yourself, at the Northwest Carriage Museum in Raymond, Pacific County.”

Stark Insider — San Jose, CA
“After spending almost two riveting, fun-filled hours there, I can’t thank Carol enough for turning us on to this hidden gem. This magnificent museum is filled with one of the world’s finest collections of impeccably restored, (I dare say Smithsonian caliber) 19th century horse-drawn carriages, wagons and buggies. All 28 were buffed, polished and painstakingly restored to their former elegance.”

The Northwest Carriage Museum preserves, maintains and interprets the collection of horse drawn vehicles and period artifacts of the 19th-century.

We are home to over fifty beautiful horse-drawn vehicles including carriages, buggies, wagons and sleighs, and  hundreds of historical artifacts that help bring history to life!

We are dedicated to keeping history alive for future generations, educating about horse-drawn transportation, restoration and conservation of the vehicles and supporting our local community.

The museum is a nonprofit 501(c)3 organization so your donation may be tax-deductible (Tax ID Number #91-2027251); consult your tax preparer for more information. In accordance with state recommendations for nonprofit organizations, we present our Federal 990s: 2016|2017|2018.